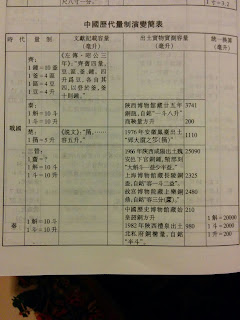 In the recipes so far, I've been working on the assumption that 10 sheng  is one dou , and ten dou  is one dan , based on the entries for those characters in A Student's Dictionary . I'm writing up the lesson plan for the class I'm teaching at Pennsic ( Zidian and Cidian : Chinese Dictionaries ) and as I was paging through Wang Li's Classical Chinese Dictionary , I noticed that one of the appendixes has unit conversions.  What's more, it has dated  unit conversions, with a list of textual and archaeological evidence to back them up. This doesn't really change the recipes since they scale, but it's interesting.  What volumes are the recipes actually calling for? According to Wikipedia , the Qiming Yaoshu  was finished in year 544 CE and took perhaps ten years to write.  This places it during the Eastern Wei dynasty.  Unfortunately, there is no entry for the Wei dynasty at all, but it's one of the  Southern and Northern Dynasties  (南北朝),
Post a Comment
Read more
More posts