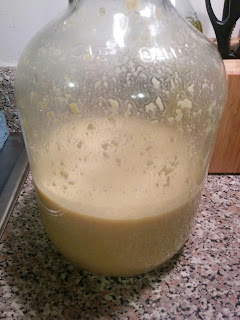 I've actually made some lumpy yeast cake wine !  It doesn't even taste bad: In the jug. The texture is pretty interesting, with a few distinct layers. Spread on a cheesecloth - I had doubled it but had to take out the second layer because it wasn't draining. Draining.  After draining. Bottled! And poured.  It's quite opaque. When I was straining it, it had a pretty strong rubbing alcohol aroma, but after straining it's mostly gone, and what's left is a mostly clean aroma with a hint of soy sauce. It has a very full mouthfeel (maybe it's too thick and I should have added less grain), with both some residual sweetness and a sharp acidity.  After swallowing, it leaves some yeasty notes, and some estery aroma that I associate with alcohol that needs to be aged more.  It seems fairly alcoholic because it leaves a little bit of a burn in my throat, but I don't really care to dig out all the equipment I'd need to measur
Post a Comment
Read more
More posts