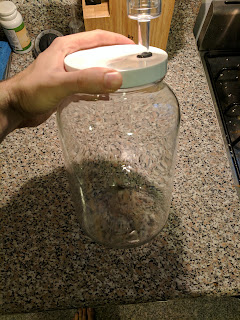 In the hunt for Song dynasty poet Su Dongpo 's mead recipe, we discovered last time that his recipe for "honey wine" is probably not using honey as a primary fermentable. But we do have Zhang Bangji's report on Su Dongpo's recipe .  I have no idea whether it's really  Su Dongpo's recipe, but at some point it doesn't matter.  They were contemporaries, and his recipe is just as reasonable and period as Su Dongpo's unknown recipe for mead. I'm brewing a one gallon batch because I have my shiny new weng -simulant, a large-mouthed jar.  The local homebrew store had them, and I think they'll do well.  It comes with a lid with a hole for an airlock, but because it's got a mouth and isn't a bowl, fitting cloth over it should also be easy.  How much air to allow in is a battle for another day, so I'm going to go the modern route on this one and use an airlock. This thing holds a gallon, so I'm going to scale the recipe to
Post a Comment
Read more
More posts