I brought one new wine to King and Queens Arts and Sciences: a "boiled" millet wine.  This is the first wine for the second "exceptional" yeast cake recipe in Qimin Yaoshu - the yeast cakes I'm actually using at the moment.  It's got something weird going on.  Let's dive in.
YE2W1 造神麴黍米酒方：To make proso millet wine using exceptional yeast cakes 細剉麴，燥曝之。麴一斗，水九斗，米三石。須多作者，率以此加之。其甕大小任人耳。 Finely file the yeast cakes, and air them in the sun to dry.  For one dou of yeast cakes, use nine dou of water, and three dan [30 dou] of grain.  If you need to make more, keep the ingredients in this proportion.  Use an appropriately sized weng. 桑欲落時作，可得周年停。初下用米一石，次酘五斗，又四斗，又三斗，以漸待米消既酘，無令勢不相及。 When the mulberry trees lose their leaves [Chinese months 9 or 10, mid October - mid December].  First, add one dan of grain, then add five dou, then four dou, and then three dou, adding each after the grain has dispersed [note that this only adds up to 2.2 dan, not 3], making sure to add …
2 comments
Read more

They liked me so much, they got me a ROCK! 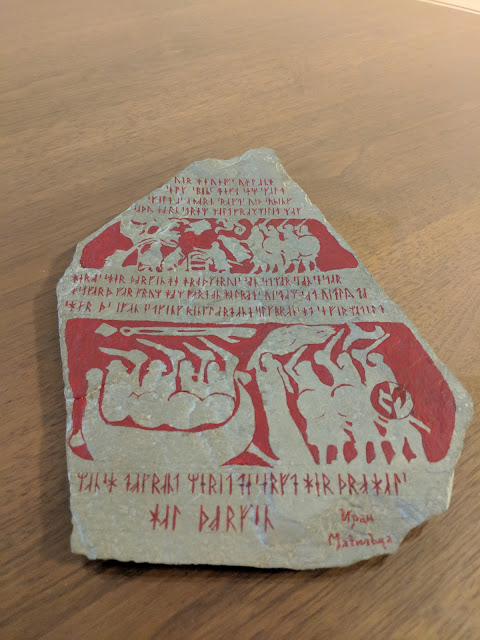 This past weekend was King and Queens Arts and Sciences championships in Mt. Kisco, NY.  I had entered it two years ago when this research was in a much, er, less tasty state, and I was still figuring out some of the process details.  There were ~40 entrants, and, as I did two years ago, I made the second round of judging, but did not win, which is totally fine.  I love these events because A&S is the thing I like the most about the SCA, and the best of SCA A&S is on display there.  Unfortunately, I didn't get to dig into the other entrants as much as I would have liked to because I got to talk to so many people!

A neat thing happened there: I apprenticed to Magnús, which in SCA land means something like "we're officially science-friends."  This is cool because it means I get to bug him with questions more than usual before he starts complaining.

I also got an award at the event which is really meaningful to me: a Maunche, which is for doing a lot of cool A&…
1 comment
Read more
More posts