I wanted to find a recipe that didn't require seven batches of grain, so I started on another short recipe elsewhere in scroll seven. I didn't translate the process for making the yeast cakes because I'm not going to make them, although it seems to be similar to the process for the lumpy yeast cakes I translated earlier, using the same grain mixture. As usual, each sentence in Chinese is followed by my translation in English. 釀白醪法：取糯米一石，冷水淨淘，漉出著甕中，作魚眼沸湯浸之。To make white young wine: take one dan of glutinous rice (Oryza sativa var. glutinosa) , rinse it in cold water until clean, strain it and put it in a weng, and soak it in water boiling with bubbles like fish eyes. 經一宿，米欲絕酢，炊作一餾飯，攤令絕冷。Pass one night, and the rice should be decidedly sour; steam it, and once it’s cooked spread it out to cool. 取魚眼湯沃浸米泔二斗，煎取六升，著甕中，以竹掃衝之，如茗渤。Take two dou of the water from rinsing the rice, and boil it with bubbles like fish eyes down to six sheng (0.6 dou), put it in the weng, then t
Post a Comment
Read more 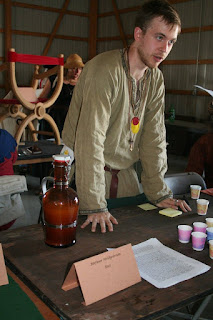 I spent last week attending Pennsic , and brought my lumpy yeast cake wine to the Arts and Sciences display, as well as the inter-kingdom brewing competition and the East kingdom brewers' guild panel.  What a blast!  Getting to share this weird beverage with so many people was really fun, especially since some people actually liked it, and some people really hated it. About 60 people came by my booth at the A&S display and tried the millet wine, consuming a little over half a gallon.  What I didn't know at the beginning is that the wine settles out very quickly, so by the end of the display, I was pouring something the consistency of pancake batter.  The flavor didn't change much, so I suspect that the heavy notes of bread are coming from the suspended yeast.  More study is needed to figure out what the flavor is like after letting it settle for a few weeks. I got a lot of great feedback at the brewing competitions.  Of course, I'd really love to make the so
Post a Comment
Read more
More posts