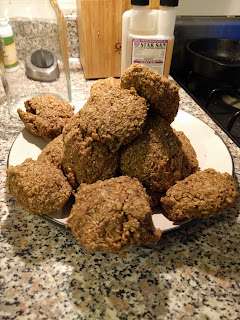 Week 4 至三七日，出之，盛著甕中，塗頭。 After another seven days, bring them out, pack them into a weng , and seal the head [with clay]. Still not having a  weng , I settled for some air-tight glass jars.  I think that, because I was simulating the hut with a plate and some boxes, this stage was pretty much a no-op compared to stacking the cakes on the plate like we did last week. The cakes smell about the same as they did the week before: sweet and caramely, with some odd alcoholic notes.  They leave behind a pretty large amount of a dark brown liquid.  I didn't taste it. Week 5 。至四七日，穿孔，繩貫，日中曝，欲得使乾，然後內之。 After another seven days, bore a small hole in each cake, thread a rope through them, air the whole string in the sun, really make sure it’s dry, and then place the cakes inside. The cakes are still really damp, about the same as last week, and have the same smell.  I think that they came out of the "hut" way too damp, but I'll have to roll wi
Post a Comment
Read more
More posts