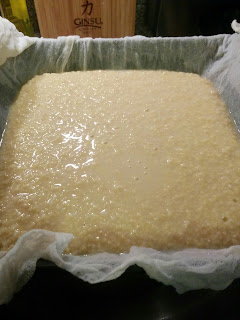 Chinese grain wines are fermented on the mash, which means that if you want to get something drinkable out the other end, you need to separate the grain from the liquor. I initially was assuming this was happening without firm evidence, because the fermented mash is not wine by any means. Blorp I've used cheesecloth with some success to filter it, but it's a little difficult because you have to squeeze it pretty hard to get the wine out, or else sensuously massage the bag of mash with your hands to allow it to continue draining.  I think that it's hard to drain because the grain particles are pretty fine, and clog up the filter.  Beer mashes can run into this problem occasionally, but don't usually because they're less porridge-like since the grain isn't cooked. Straining through cheesecloth has been what I've been doing, but you still end up with a lot  of sediment coming out of the bag. Some of this sediment will settle out, particularly
1 comment
Read more
More posts