But I Haven't Got a Weng!

By Alec Story - November 29, 2015
All of these recipes I've been writing about are supposed to be fermented in a weng (甕, wèng, Middle Chinese 'uwngH), which is a large ceramic container with a mouth.

Or the leftmost vessel in this picture (this is a historical, large weng, found with mash inside it): 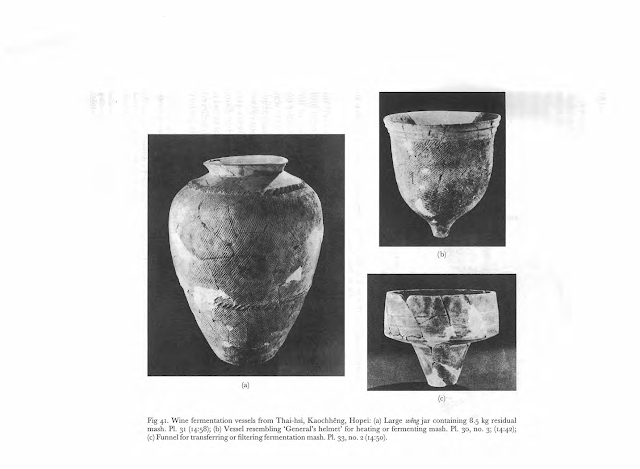 Historical weng were definitely unglazed, since the Qimin Yaoshu has instructions for how to season them.  They also came in a variety of sizes, and still do.

None of that really matters, since I haven't got one, and you probably don't either.  So what can we do?

My initial fermentations were in a gallon glass jug, like you'd use for a small amount of mead or cider.  You can stick an airlock on the top of it and keep the contents safe from infection, just like you would with western alcohol production.

The problem with making grain wines in jugs is that the mouths of jugs are smaller than most spoons, which makes it hard to get the grain into or out of the jug.  Pushing grain through a funnel with a stick is not very much fun, and you mush up the grain.  Larger carboys have the same problem.

Larger wide-mouthed glass jars would work well, although of course the partially porous, fatty seasoning on an authentic weng probably has an effect on the flavor.  I don't have one of these either, but you could probably find one without too much trouble.

Fermenting buckets would work if I was working at that scale, but five gallons of fermented porridge is a lot to strain afterwards, and probably more than I can get my friends to drink.  Smaller amounts would mean a lot of empty head space.  Plus, I use those buckets to make beer!

But what I do have is a few large bowls, and they work pretty well.  I cover them with a clean cloth to keep bugs out: 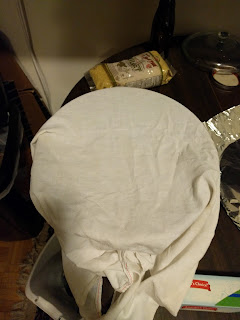 And then loosely fit a sheet of aluminum foil over the top to mimic the smaller mouth of a weng: 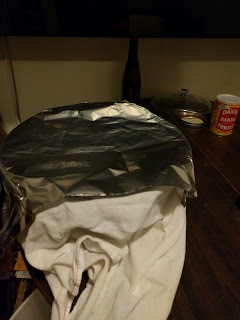 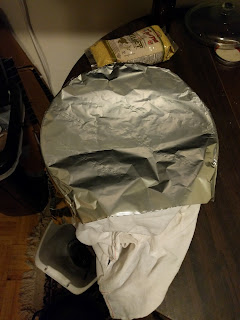 This seems to work nicely.  I think that these recipes expect a little bit of fresh air to get in, so sealing up the fermenter completely is probably not right.