By Alec Story - March 29, 2016
I've been a bad blogger, and neglected to post for some time for life reasons.

I brought this wine to the King and Queens' Arts and Sciences competition and did very well!  They included me in the second round of judging but I backed out because winning carried a bit of a burden with it that I did not want to shoulder.

Thankfully, this recipe is attributed to a person, so I can name it something better than "Millet Wine and Rice Wine from Exceptional Yeast Cakes #1." (YE1W1 and YE1W2 for those playing along at home)  No idea who Yuán Púshè was though.

The grain schedule for this recipe is pretty simple:

If you have one unit of powdered yeast cakes, on successive days add 3 units, 5 units, and 10 units of your grain of choice.  If using millet add another 3 units on the next day.

The millet should be steamed twice, and the rice should be just barely steamed, and then have boiling water poured over it.  I tried wrapping the millet in fabric while steaming to keep it moist, but that wasn't quite enough.

I found out halfway through making this that I should probably be soaking the rice.  More on that later.

I underestimated how much powder the yeast cake would make, and only got 50 mL.  That's still fine, split in half we're looking at about 500 mL of each wine, which is really fine. 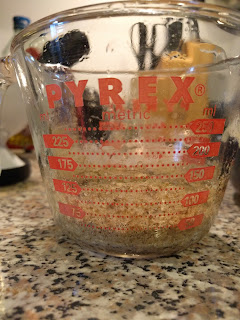 Adding 25 mL of water to 50 mL of powdered yeast cake made almost a stiff dough: 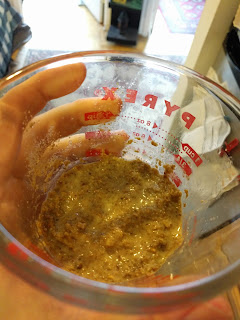 And even after two days I can't tell if I'd notice bubbles rising.  I tried adding a little extra water, but it just got absorbed.  However, there are bubbles on the side of the glass, so I think it's woken up enough to use, and I had a schedule to keep.

I think that I may have been buying the wrong kind of millet previously.  "Standard" Chinese millet is probably Setaria, and this recipe doesn't care but previous recipes did.  I contacted Bob's Red Mills and they told me that their millet is Proso millet. 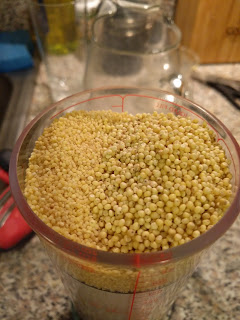 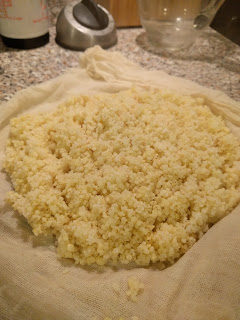 Mixed with the starter.  Note how dry this is. 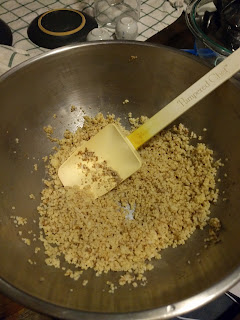 Fermentation proceeded, but not all that well because of the dryness.  I had to add some extra water. 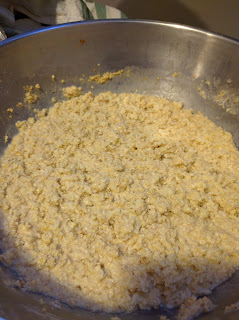 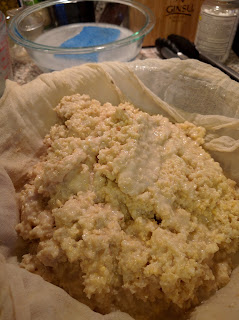 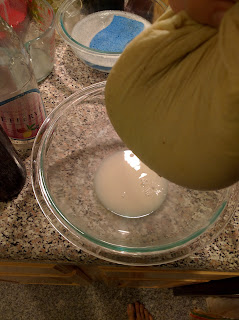 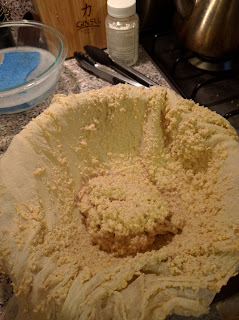 After straining a few times, and letting it sit for a few months to settle, it became brilliantly clear: 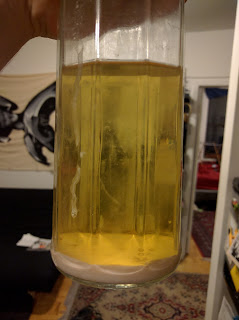 Tasting notes:
nutty, alcoholic sake nose, with some sweetness
semi-sweet, with an acidic bite, and a pleasant mouthfeel
an alcoholic aftertaste that resembles the nose

The rice was similar, but much wetter due to the boiling water pour-over method: 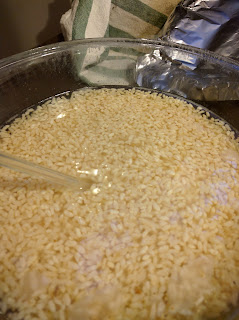 I think this is what is referred to in some literature as the "floating log" or "floating ants" stage of fermenting, which suggests that it wasn't done, but alas, the hour had struck.

After straining, there is a shocking amount of sediment in the wine, which didn't really settle out: 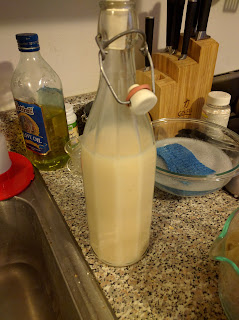 I'll post tasting notes when I figure out how to clarify the wine.