I Found a Better Name

By Alec Story - November 14, 2016
I took a trip to the Metropolitan Museum of Art in late September because I thought there was an exhibit on Chinese laquer ware that was going to close soon.

Instead, I took a stroll through the Chinese collection, on the lookout for drinking cups I could replicate, and took a ton of photos for my friends with research interests.  There was a lot of debate about what exactly this woman 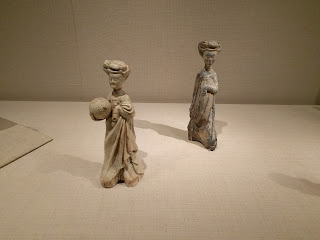 is holding happening in the SCA China facebook group, and I happened to be walking past the statue at the time so I took some video and helped answer the question.

I also took a look at the scrolls section since I have friends who do beautiful calligraphy and are always looking for ideas.

I came across this beautiful scroll:

Which is titled, politely, "Drinking and composing poetry."  Except it isn't.  Here's the title colophon

Read right-to-left, these are foot-high characters that read

I don't think a better name for the blog exists, so I'm taking it.