By Alec Story - July 18, 2017
As I wrote a while back, if you buy hulled millet in the grocery store or online, and you steam it, you don't get great results.  A lot of the grains don't cook completely, which leads to problems fermenting.

The problem is really that the grains are unpolished and still have a layer of bran on them - they're the brown rice equivalent of millet.  I can buy white rice, but not "white" millet.

The solution is to use more power.

My food processor has two blades which looked reasonable to use.  One is the regular cutting blade (note that Cuisinart recently had a blade recall, which affected mine), and the other is the shorter-armed, plastic dough blade.

I tried both, for sixty seconds continuously: 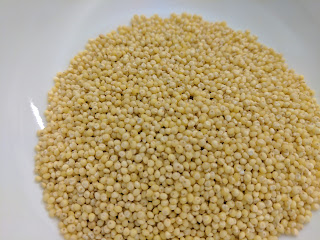 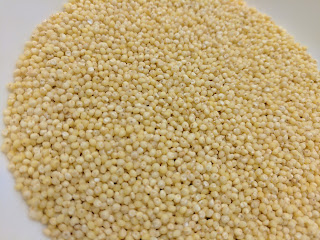 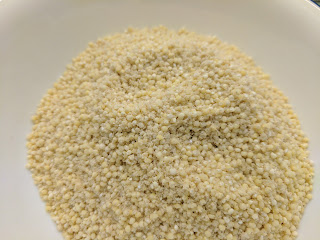 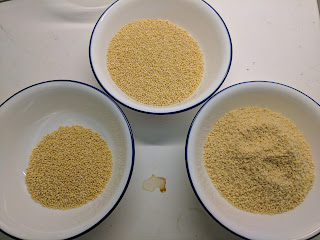 The dough blade didn't really change the grains, but the knife blade did - the grains had a lot more powder, and when washed were much whiter: 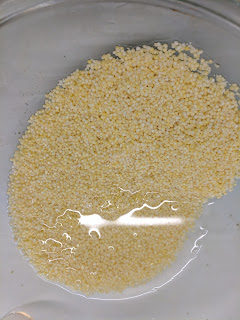 Part of the problem with the dough blade is that it doesn't actually reach all of the grains, but regardless, we have a way to polish the millet now.

I soaked 3/4 of a cup of the polished grain for a few hours and it expanded to 8 ounces.  Not the dramatic near-doubling that rice does, but still it's something.  Soaking overnight didn't give it more volume.

Post-cooking, it's definitely better than before: 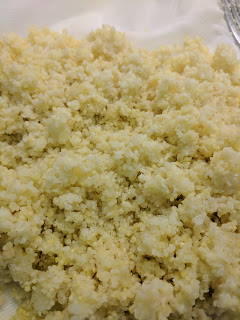 This is after one steaming.  There's some uncooked grains, but if I mix it together and re-steam (as directed by the book), it's fully cooked.

During fermentation, there's still a lot more bulk than with the rice, which I think decomposes more fully so maybe I should investigate other strategies for polishing, but this is at least a start.

This work is licensed under a Creative Commons Attribution-ShareAlike 4.0 International License.
millet