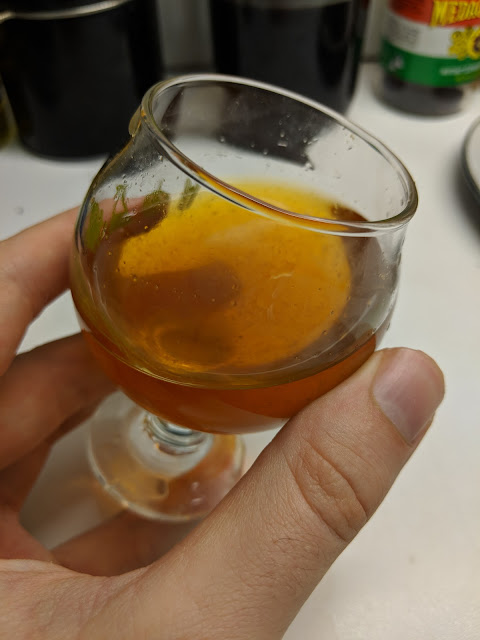 Based primarily off of the poem I discussed earlier, and cross-referencing other sherbet recipes, I made a caramelized honey lemonade, similar to bochet, which is mead made from caramelized honey.

What I drew from that poem is:

a hundred flowers brewed into a sweet dew syrup


In the southern garden, boiled to red dragon marrow

The honey should be boiled until red.  This is a little conjectural, but I think fairly convincing.  Other sherbets cook their syrups pretty severely:  Compendium of Essential Arts for Family Living's Chinese Quince sherbet has you cook the quince slices in honey until it forms "flexible strands," which is pretty cooked.  I got a similar effect after the syrup I made had cooled fully.

And then we add lemon juice.

Sherbets typically have a fruit juice and an optional sweetener added, and this fruit is definitely it.   Is it lemon?

I've found several texts that print this poem, all 18th century or earlier.  Some render "meng" as 濛 "drizzle," some render it as 氵+𫎇 - I haven't found the combined character in unicode, and even the component doesn't render for me, but I've linked it for you.  It's very similar to 濛.

Lemon in modern Mandarin is 檸檬 níngméng, which is a slightly different meng than above, but clearly related, at least phonologically.  "Lemon" comes ultimately from the Persian لیمو "limun" which is relevant when comparing to the Chinese names which follow:

Corrections to the Bencao Gangmu by Zhao Xuemin, published in 1795, is how I first found this poem, and says that this is a fruit which is "similar to a tangerine, but sour."  Zhao says that this poem is about a fruit called "good-for-meng" (the second one), used to make a hot beverage.

We also get another mention that this fruit is like an orange, but smaller, ripe in the second and third months, yellow, and extremely sour, as well as it being good for pregnant mothers.  And a mention that the Yuan court had an orchard of some 800 trees of this kind planted in the Bay of Litchis in Guangzhou for the purpose of making thirst-waters.

Zhao goes on to say that he thinks the poem means to simmer pressed "li mu" juice in sugar, and tells us that "sherbet" and thirst-waters are the same thing.  He also adds that this juice can replace vinegar.

The same poem appears in The First Selection of Yuan Poems compiled for the Siku Quanshu collection of every book ever published in 1784, but ascribed to Gu Sili who died in 1722.  This is the copy I worked from for the poem, and it uses the 氵+𫎇 form as well.  The poem also appears in the Ming dynasty collection The Stone Granary Collection of Poems from the Ages by Cao Xuequan, 1574-1646, in the undated Collection of Wu Lai’s Deep Gifts, and in Grouping of Song and Yuan Poetry by Chen Chao, among other places.

Another reference to this story is Yunnan Notes by Li Diaoyuan, which calls this fruit "黎檬 li meng" - note that this is the modern "lemon" meng - and gives the same description of it, and recounts the orchard story, the poem, and the simmering of juice in sugar, almost verbatim.
Yunnan Narrative Anthology, which is undated, and also has no punctuation, recounts more or less the same story, again calling the fruit "li meng," while also mentioning that one can dry them after simmering in honey and salt - although they turn black.  It also calls the fruit "li mu."

Guangdong New Speech by Qu Dajun is a 17th-century text which again tells the same story, calling the fruit "li mu" and "good-for-mothers" like the other texts, quoting the poem, describing preserving them in salt, and using them to replace vinegar.  This is the oldest version of the story I've found.

So all together, we've got a fruit that's clearly a loaned name, but one that's a lot like "limun," is yellow, not very big, and very sour.  Its name uses the same characters as modern lemons.

On to the cooking:

I don't have quantities or anything in this recipe, so I took about a cup (350g) of linden honey and juiced two regular grocery store lemons and got about half a cup of juice.

I then boiled the honey for about half an hour until it stopped steaming and started to smoke.  This was a bit terrifying, and the honey foams up so much I made a mess of my stove. 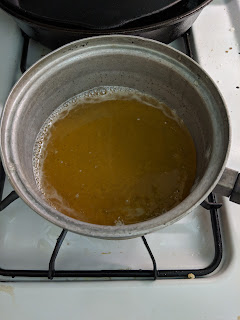 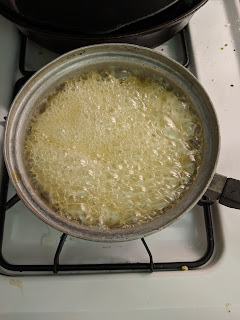 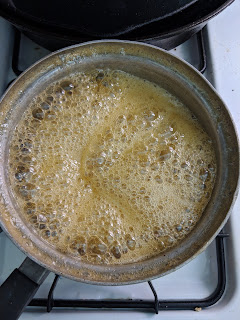 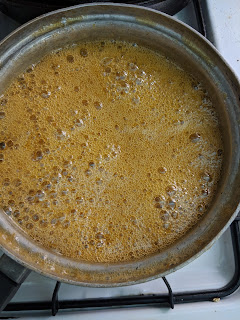 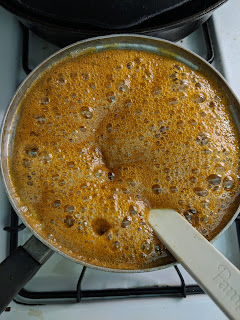 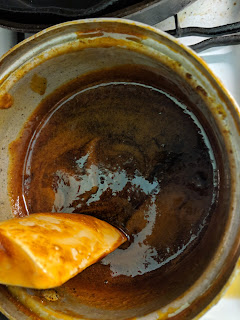 I logged the different colors on a piece of napkin, and if you do this I suggest you do so as well since it's hard to tell what color it really is in the foam. 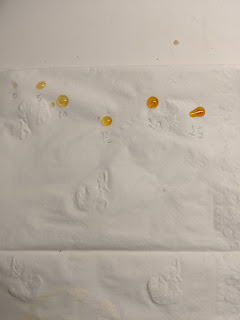 I then added the lemon juice and simmered a little longer
The syrup was pretty runny when hot, but once cooled, was very thick.  The honey doesn't just darken, it also becomes a caramel.  I think I can get away with a lot more lemon juice, especially since the final product was not all that sour.  It was pretty nice though!
Interesting flavors of toffee and other caramels, a little bitter, and nowhere near as sweet as you'd think concentrated honey would be.  Not a lot of lemon character, just the sourness.

It actually wound up being too hard to dilute into stuff, so I added more water before bringing to a local event.

The main problem with doing this is that you make a terrible mess on your stove if you don't watch really carefully to prevent boilover. 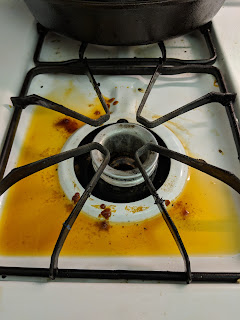