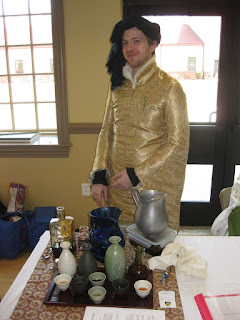 Back in March, I competed in the Crown's Arts and Sciences Championship, and with the assistance of my dazzling outfit managed to charm the judges into giving me one of the two winning spots!  I'm honored to have won: the competition was very strong.

I've been a little remiss in updating the blog because the world is falling apart, but I'm back!  And I want to share both what I put together for the competition, and my actual documentation so that others can see at least one approach that seems to work ok.

I wanted to brew a selection of thirst-waters / sharbats as my entry.  The competition judges one entry or several as a single body of work, so it wasn't strictly necessary, but part of the story that I wanted to tell was the spread of sharbats out of Central Asia and establishing them as a drink shared across 8,000 miles, from Andalusia to China.

It turns out that it's a little hard to draw a direct linguistic line between sekenjabin in cookbooks like The Anonymous Andalusian, but it seems pretty clear to me that this concept of a sugar syrup with a souring agent and some other flavoring is the core idea here.  So to do this study, I made:


I'm not going to include the recipes here because they're in the documentation, but I do want to discuss some of my thought process.

I was lucky enough to be able to source the quinces from H-mart, and set to work back in November.  I made enough of the quince-lemon syrup to serve at the Mudthaw feast, which was a nice addition I thought.  Some other SCA bloggers have made the syrup as well, and were my inspiration in choosing it.

I chose the five-flavor berry because it's delicious, and because it's fairly easy to get the dried berries from a Chinese grocery store near me.  The recipe seems to expect them to be dried, and I like that I'm able to make it easily and stick to the recipe closely.  Also, it's delicious and I need to make some for Pennsic.

The grape syrup was a by-product of some winemaking that I did this fall: diverting a pint or so of fresh-foot-crushed grape juice was easy.  I wish that I'd been able to get an understanding of period Chinese grapes better, rather than just using Zinfandel, but it's a little rough for me to set up my own viticulture on my balcony.

The quinces were interesting.  Quinces are like the world's worst apples: they're mealy and not really sweet when raw.  But after cooking, particularly cooking in sugar, they turn a beautiful red-purple color and get a gorgeous rose aroma.  The Chinese recipe just cooks them in honey which is straightforward, but isn't quite as good.  The candied quince pieces produced as a byproduct are delicious, though!

The Egyptian/Levantine recipe is more complicated and less concentrated, so you get delicious rose poached quinces rather than candied ones.  The syrup is fantastic, so find me at Pennsic because I've got half a gallon of the stuff and will need help figuring out which kind of rum goes best in it.

One interesting thing I'm realizing in this sharbat process is that a lot of the Chinese recipes direct you to 熬至滴入水不散 "When boiling, drip into water so that it is not dissipated."  At first I thought this just meant "boil until it's concentrated enough to not lose its flavor when diluted," but after cooking several of these I think it might actually be more like directions for cooking jams and candies.  This is similar to cooking to a "soft-ball" stage in candy-making.  I'll return to this idea in my next post, which will discuss a kumquat syrup.